To manage permissions, the extension BlueSpicePermissionManager provides the administrator interface. It is located under Global actions > Management > Permisison manager. This links to the page Special:PermissionManager:

In BlueSpice version 3.0 roles were introduced as a way to manage wiki rights, . The main intention of using roles is to simplify rights management.

Roles represent a collection of individual permissions that are necessary to perform certain function on the wiki. For example, for a user who is supposed to only read the wiki, many permissions in addition to the "read" permission are needed: the ability to change their own settings, to search the wiki, to view page ratings, and so on.

All permissions that make up a logical group are encapsulated in a role, in this example the role "reader". If wiki admins want to grant read-only rights to a user group, they only need to assign that group the "reader" role, instead of assigning many individual rights.

By assigning roles to a group, all users belonging to that group will receive the rights contained in these roles. Roles are not assigned directly to users, but to groups instead. Users are then assigned to one or more groups.

By default, BlueSpicePermissionManager includes a number of pre-defined roles that serve most user needs on the wiki. The individual permissions contained in a role can be seen by clicking the info icon in front of the role name. It opens a dialog with a permissions list for the role: 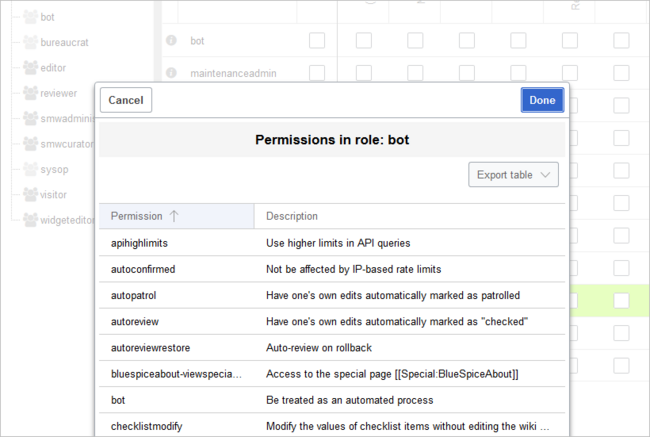 The permission manager consists of the group tree (1) and the role matrix (2):

The group tree (on the left) shows all existing groups:

The columns in the role matrix are:

Every change to the roles is logged in the MediaWiki log book, found under Special:Log under Permission Manager log type. These logs are availble only to wiki administrators (users in groups with the role admin).

All changes to the role matrix are backed up. By default, the last 5 backups are kept. This limit can be changed in BlueSpiceConfigManager, under configs for the extension BlueSpicePermissionManager.